International Trends and Players for a Strategic Philanthropy: Register now 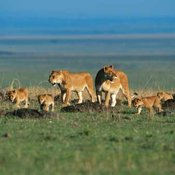 With a seven-figure commitment from the DiCaprio Foundation, the fund hopes to catalyze investment in the recovery of Africa’s lions and landscapes and will invest tens of millions of dollars to support conservationists working to reverse the decline in Africa’s lion populations — which have dropped from two hundred thousand a century ago to just over twenty thousand today — and restore lion habitat across the continent. To that end, the fund will direct 100 percent of every dollar raised to the most effective efforts it can find.

Conservationists estimate that if existing national parks and nature reserves were properly resourced and managed, and if the local communities around those parks and reserves were supported, Africa’s lion population would at least triple in size. To that end, LRF will fund efforts to reduce human-lion conflict, enhance law enforcement and end poaching, and secure the space lions need to roam and thrive. The fund has already awarded grants totaling more than $800,000 to the African Parks Network in Pendjari National Park, Benin to improve anti-poaching efforts, communications, and monitoring of lions and threats; conservation organization Panthera, in support of its efforts to create infrastructure and purchase equipment for the enforcement of anti-poaching laws in Niokolo-Koba National Park in Senegal; and the Wildlife Crime Prevention Project in Zambia, which investigates the targeted poaching of lions for their skin and other body parts.

Read (Philanthropy News Digest)
Subscribe
This website uses cookies to improve your browsing experience or help us provide our services. By closing this banner, scrolling this page or clicking any of its elements, you give consent to our use of cookies.
Close
More